Spoiler alert.
​
I will write about some technical aspects of what Khabib Nurmagomedov did at UFC 254.
​
I’m going to talk about Khabib’s triangle choke sequence. I think it’s a pretty smart sequence, especially in the context of MMA.
​
Let’s start from the point where Khabib takes down Justin Gaethje and gets to the mount position.
​
He immediately sets up arm triangle from there.
​ 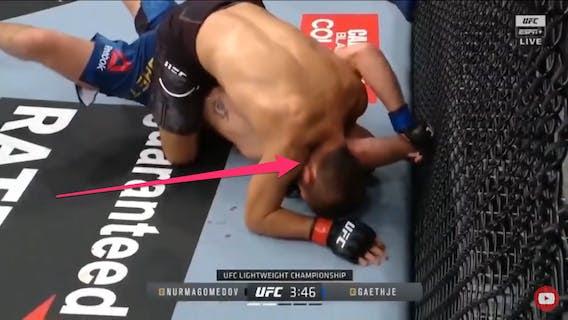 ​
If I were in this position and wanted to finish my opponent with arm triangle, I would move to my right-hand side and take a sharp angle (about 45 degrees) as pointed in the photo above.
​
There can be different ways of finishing arm triangle, but I suppose anyone skilled would move to their right hand side in this situation.
​
I searched for a good arm triangle choke video on YouTube, and the first video I opened tells you exactly how I do it as well.
​
If you’re curious about the finishing mechanics of arm triangle, check out this video by Neil Melanson. 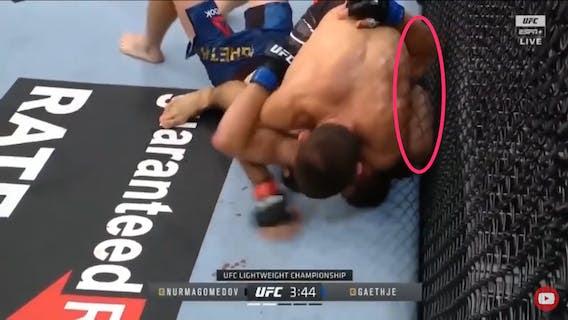 This positioning by Khabib is pretty neat.
​
At this point, Justin’s right arm is trapped between Khabib’s body and the cage.
​
If you want to catch your opponent with triangle choke from the mount position, you have to control both of your opponent’s arms well without losing your position.
​
You control one of their arms in such a way that they will have to raise their arm. You can use your arm or leg as an under hook against that arm of your opponent.
​
But Khabib doesn’t need to do any of these things because Khabib’s body and the cage already trap Justin’s arm.
​
By the way, this position may have given Justin some false sense of security.
​
Even though Justin’s right arm is sticking out as if it’s ready to be armbar-ed, there’s no space for Khabib to go for armbar from this particular situation because of the cage.
​
Justin may not have to worry about his right arm (yet) … but he probably did worry about his left arm.
​
Khabib has some space on his right hand side, and he could do armbar in that direction after all.
​
So, Justin tries to hide his left arm.
​
At that moment, Khabib steps over to clear that arm away while being heavy on top of Justin.
​ 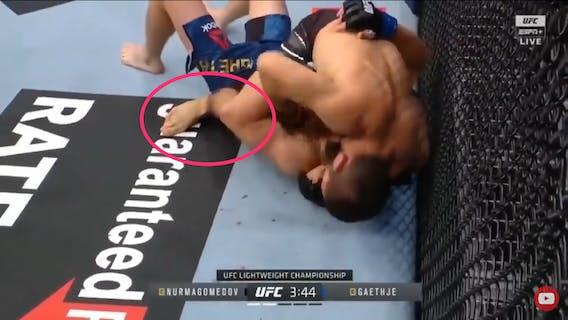 ​He hasn’t had to adjust his mount position much because his positioning has taken care of everything so far.
​
Now, the most obvious step for Khabib after stepping over Justin’s arm is to go for triangle choke, but I noticed some subtle things.
​ 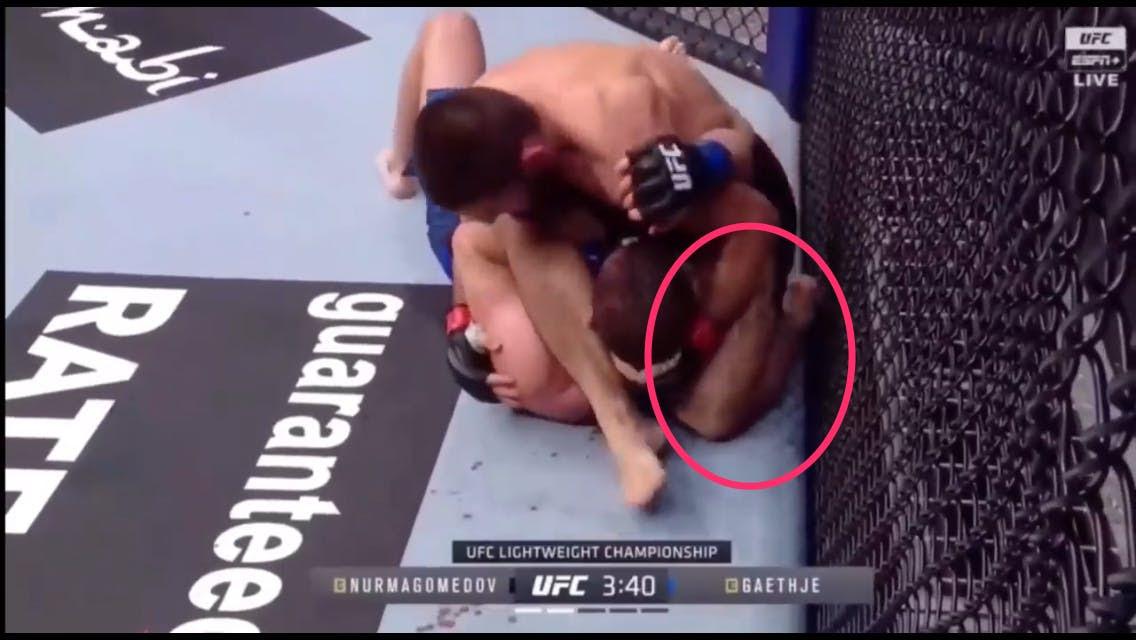 ​
If you look at the photo above, it looks like Khabib is using his leg to create a frame between Justin’s body and the cage.
​
This way, Justin cannot turn to his right side and close the space between him and the cage.
​
Khabib needs this space for triangle choke. In fact, he creates some more space and securing that space by posting his left arm/elbow on the cage …
​
Like this:
​ 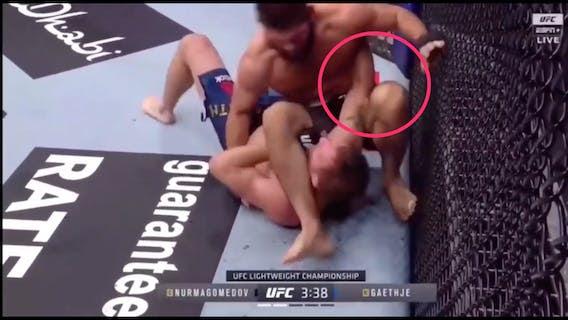 ​
Now that Khabib has some space to execute triangle choke, he falls on his back and secures triangle. 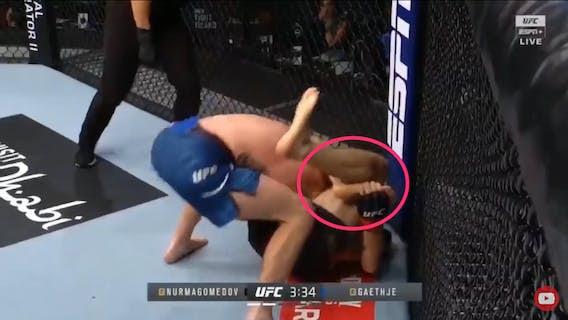 ​Khabib’s triangle looks tight, but he makes sure to tighten it even further by adjusting his position. 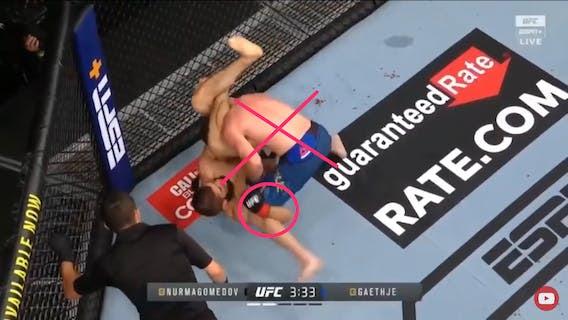 Khabib takes more or less of a perpendicular angle. This angle is what Ryan Hall recommended in his legendary triangle choke DVDs, by the way.
​
I believe this angle is the best angle for triangle choke, because it gives you the strongest and most efficient finishing power for triangle choke.
​
In MMA, this positioning will make it harder for your opponent to hit or lift you as well.
​
Overall, Khabib’s positioning was on point.
​
I’ll surely try this sequence as soon as I can.